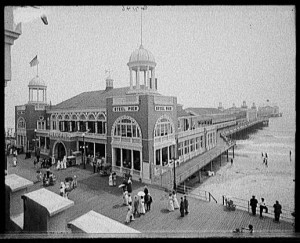 Early Days of the Steel Pier at the Jersey Shore

The Nostalgic Steel Pier in Atlantic City is a  legacy of fun and entertainment for the entire family.  It first opened its gates in June 1898, and quickly became one of the most famously known theme parks and attractions, earning its reputation over the decades for hosting an array of concerts, unusual shows, and the greatest entertainers of the times. It was called “The Showplace of the Nation!” Attractions like the Diving Horse, High Divers, Motor Cycle Cage, Diving Bell where highlights, the pier was initially constructed of wood and steel that stretched 1,600 feet into the ocean. The modern pier is of concrete and steel, spanning about a 1000 feet.Turning a pier into an amusement park was the brainstorm of Dr. Jonathan Pitney, who believed that the accessibility of the city via the Camden and Atlantic Railroad would make the planning of a huge tourist resort an attractive venture. George Hamid, who had been part of Buffalo Bill’s Circus, would later add to its appeal by bringing in many unusual acts that Steel Pier became renown for, like the Diving Horse, the Human Cannonball, Diving Bell and Skiing Dog. In addition, it boasts a rich legacy of having sponsored as many acting legends and entertainers as became popular through the 1920’s and 1960’s, such as Marilyn Monroe, Milton Berle, The Beattles, George Burns, the Three Stooges, Dean Martin, Frank Sinatra, Mae West, Abbott and Costello, Dick Clark, Annette Funicello, Paul Anka and many more.

A fire destroyed a major portion of the Steel Pier in 1969.  Along with air travel lifting people off to more exotic venues, the park declined in popularity and closed in 1976.  A second fire erupting in 1982 destroyed it completely.

Then in 1993, Trump’s Taj Mahal, which had opened three years prior, rebuilt Atlantic City Steel Pier. Through a joint venture, the Catanoso brothers, with Taft Johnson and Edward Olwell, reopened the park with fourteen rides and shows. Today, with 22 rides, games, thrilling shows, a treasured nostalgic past, plus plans for future growth, Steel Pier continues to offer plenty the entire family is sure to enjoy. Currently the Pier offers the number one rate attraction in town, a Scenic Helicopter Ride over the casinos, beach and boardwalk.  There is also a three stage transformation in place that will restore the landmark to it’s original success and will eventually be a year round attraction at the Shore.