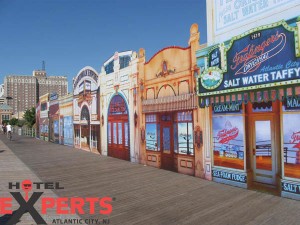 Located at North Carolina Ave and the Boardwalk

If you’re a fan the hit HBO Series “Boardwalk Empire” you may want to check this cool facade that resembles the set of the show.  It’s a great place to connect the real Atlantic City with the TV Series, you can take a picture or two in front of the actual stores and hotel features in Boardwalk Empire.The idea for this attraction was created by legendary local talk show personality, Pinkey Kravitz, who hosts a show on WOND 1400 AM from 4pm to 6pm Monday through Friday. Pinkey is a huge advocate of Atlantic City and Southern New Jersey and has been a mainstay in the promotion of the resort city since city since the 1970’s.