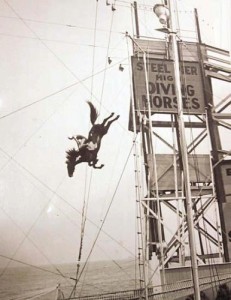 The Diving Horse at the Steel Pier in Atlantic City, NJ is one of the most memorable and amazing attractions every created and those lucky enough to experience it have memories that will last a lifetime.Once upon a time, long ago (1950’s – 70’s) and not so far away (The Steel Pier, at the Jersey Shore.) a well trained and apparently fearless and frisky, water-loving horse with no fear of heights would leap off a tower into a pool of water with a pretty young women in swimming attire on their back. Legend has it that the horse did not always wait for his or her rider, but would bolt up the ramp and off the tower and into the pool below, without so much as a please or thank you.  Can you imagine a dive of between 40 – 60 feet into a huge pool?

The Diving Horses gained “star” status after completing extensive training and, fared well until their age, or perhaps a sudden dislike for water, or, fear of heights, disqualified them. When no longer able or willing to perform their death defying act, they were sold or retired to owners who took great care of them on the farm.  The horses that were a part of the show were always treated like royalty by their fans and owners during and following a career as historic performer.

We were unable to uncover any information about injuries to any of the high diving horses that were in the world famous boardwalk show.  The only casualties of any kind associated with this acts was an occasional injury to a rider once or twice a year, usually a broken bone, the result of swimming around in a small pool with four thrashing hoofs attached to an animal much larger than they or, sustained while climbing out of the pool after the high dive.  Back in 1931, a rider named Sonora Carver lost her sight doing a dive, the impact with the water damaged her eyes.  She had been diving for seven years and while rding her horse “Red Lips”, she entered the water with her eyes opened.

Amazingly, Ms. Carver continued performing as a diver until 1942 a total of 18 years, 11 years blind. She later wrote a book about her experiences riding the diving horses at the Steel Pier and one important note is that she lived to be 99 years old. The book was made into a movie  “The sad, and happy, end of the horses” – sold at auction for any intended use, but the final two diving horses, Garmal and Shiloh, were sold to an animal protection fund. The Fund arranged a quiet retirement for them in pleasant surrounding and with caring responsible owners.

Contrary to Animal Rights Activist’s claims, the horses associated with the show were never injured, never mistreated in any way and brought nothing but happiness and excitement to those fans in attendance to see America’s Number One Boardwalk Attraction.