History of the World Famous Boardwalk in Atlantic City 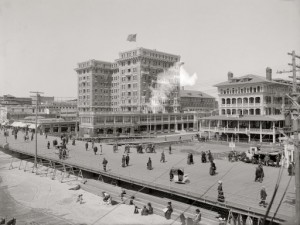 Let’s take a historic walk down the Atlantic City Boardwalk and review some of the amazing history of the grand structure by the sea.

What was the original main attraction in Atlantic City, New Jersey? Answer: The Boardwalk, then came the World Famous Steel Pier.

It was first constructed in 1870, 16 years after the resort city was incorporated by the New Jersey Legislature. Atlantic City was viewed as a prime piece of real estate and its development brought wealthy visitors to the newly constructed resort with ocean views.  Costing five thousand dollars and built 10 feet wide in sections of 12 feet, the first boardwalk was dedicated on June 16, 1870.  No stores or commerce of any kind was permitted within thirty feet of the walk, and at the end of each summer season for many years, the Boardwalk was actually taken apart and stored for the winter months.

Visitors could walk out of their hotel and onto the beach but were put off by the sand. Developers did not anticipate how much of an issue the sand would be, enlisting the help of a railroad conductor and a hotel owner to create a walk way over the sand. Alex Boardman and Jacob Keim presented the idea of an eight foot wide wooden foot walk that would lead from the beach to town. The boardwalk was constructed from wooden planks arranged in rectangular patterns known as herringbone patterns. The planks lay on a substructure of concrete and steel. The boardwalk has been replaced a number of times, in 1884, 1889 and 1944 due to hurricane damage.

A storm in 1884 was the cause for a third boardwalk to be built, twenty-feet wide, two miles long, and this time with pilings five feet above the beach so the tides could wash safely underneath. Safety was not exactly the first thing you thought of when it came to the Boardwalk.  At the beginning there were no railings, and accounts told of at least somebody every day falling off the boards, usually in the act of flirting.

The length of the boardwalk was originally 1 mile long, and now extends from Gardner’s Basin to Ventnor City. It is presently 60 feet wide and just over six miles long, currently the world’s longest wooden structure walkway.

The boardwalk prevented sand from littering hotels and casinos and in the early 1900’s amusement piers were built along the boardwalk. Once used as a fashion runway for wealthy visitors, the structure was transformed into a source of entertainment. It was not unusual to see people lined up for Dr. Courney’s Premature Infant Exhibit or a marathon dance contest.  Historic Convention Hall is located on the structure and continues to play host to many special events including concerts, sporting events etc.

The roaring 1920’s brought much excitement to the area. Stunts, shows, the greatest big band music of the era, the original Miss America pageant and parades were all part of the entertainment. Women and men in the latest fashions, who wanted to be seen, knew the wooden walkway was the place to be and be seen. In 1929, just months before the stock market and U.S. economy crashed, The New York Times toasted the AC Boardwalk as, “A magnificent proof of America’s newly found wealth and leisure. It is an iridescent bubble on the surface of our fabulous prosperity.”

It is a permanent staple of the Jersey Shore, providing access to hotels, gift shops, attractions and the famous casinos that hundreds of thousands of travelers flock to every year.  The historic “Steel Pier” still exists and is a growing attraction, “Central Pier” is there along with the “Pier Shops” and “Garden Pier” which hosts an amazing museum.

This was the first and longest wooden walkway, and still is to this day.  Over a 140 years after its emergence and evolution, the it still stands as a historic American symbol of good times and rich culture. Some may still believe that Atlantic City’s future rides on the roll of a dice. You might want to take a stroll on that timeless Boardwalk to realize this city at the Jersey Shore is going nowhere but up.  Proof of this is in the opening of Revel, the first new casino since 2001 and the addition of the Tanger Outlet, The Walk among other proftibal ventures.