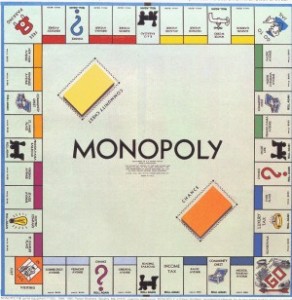 Atlantic City and Monopoly, Perfect Together.

There have been many accounts of who actually invented the game of Monopoly.  The bottom line is that  Charles Darrow is best known for creating an Atlantic City variation of “Monopoly“, the  original game was called “The Landlords Game”.  Darrow was a salesman of heating and  engineering equipment but lost his job during the great depression, triggered by the stock  market crash of 1929.  He decided to create a handmade versions of the game and sell copies to his close friends. He launched Monopoly in 1933 and it quickly became a huge  success, so he decided to patent his invention. What’s truly amazing, is that today, the value of the properties on the Monopoly game board reflect the actual condition of the real streets in Atlantic City, NJ with Boardwalk and Park Place being the nicest and Mediterranean and Baltic being the slums.

Atlantic City became the inspiration for game inventor Charles Darrow’s “Monopoly” game because of his fondness for childhood vacations spent in the beach-side city. He often played a game called “The Landlords Game” with his friends, came up with the idea to apply Atlantic City to the existing game.  Darrow was an unemployed Philadelphian at the time of the game’s invention, and most of the “real estate” for sale in the game is based on actual streets in Atlantic City, New Jersey, with one in-famous  exception.

“Marvin Gardens” in the Monopoly Board Game is a misspelling of “Marven Gardens”, a suburb of Atlantic City. “Marven” gets its name as a hybrid of “MARgate City” and  “VENtnor City”, and is not just an odd spelling of the popular male name “Marvin”.  Hasbro, the game’s current owner, made an official apology to residents of Marven Gardens, perhaps as a publicity move, in the late 1990s. While Charles Darrow cannot be given full credit for inventing the game alone, he is a kind of a folk hero to many, especially inventors trying to create the next great phase!   Biggest lesson to learn, the first one to Patent and Trademark wins.

Atlantic City’s connection in the Monopoly game allowed for the nickname, “Monopoly City” and brought extra attention to the Jersey Shore, a popular vacation destination on the Atlantic Ocean. Monopoly landmarks, photos, and plaques are located around Atlantic City and are dedicated to the game and its “inventor” Charles Darrow. The city gladly embraces its Monopoly heritage, and perhaps some tourists include Atlantic City on their vacations simply because of the Monopoly Game connection. Unfortunately for Atlantic City, newer versions of the game have completely abandoned the once prestigious, New Jersey Shore Town.

The royalties from the sales of Monopoly made Darrow a multi millionaire. He retired at age 46 and lived the rest of his life in Bucks County, Pennsylvania about one hour from Atlantic City, enjoying a world travel and became a collector of exotic orchids.  Many families may not be aware of the interesting history of the game Monopoly, but the  game continues to be enjoyed from one generation to the next.

4 comments for “History of the Game Monopoly in Atlantic City”