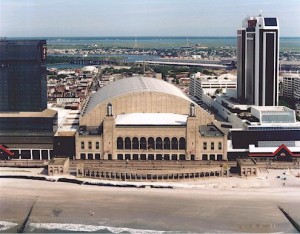 Played host to 1,000’s of great performers. Where the World’s Largest Organ Resides.

Atlantic City Boardwalk Hall  was once called convention hall, take a look at a little history including  past events, performers and much more.  Built in 1929, also known as the “Convention Hall”, was the resort towns premier gathering place for almost a century, and even today is a mecca for sports, conventions, entertainment, and other important events. It also plays host to the World’s Largest Musical Instrument a Pipe Organ, that still resides in the hall and offers daily tours.

Boardwalk Hall has hosted sporting events ranging from basketball, tennis, ice skating, and polo to wrestling, bull riding, and mixed martial arts, as well as indoor versions of football and auto racing. It was the home ice of the AC Seagulls hockey team from 1930 to 1952, and was also home to the AC Cardsharks an indoor football team and Boardwalk Bullies minor-league hockey team in previous years. The Atlantic 10 men’s college basketball conference plays its championships at historic hall.

Back in the day this venue played host to many conventions and gatherings just about every year since its construction in 1929. Most famously, it was the home of the Miss America pageant from 1929 until 2004. In 1964, it was the site of the Democratic National Convention, where President Lyndon Johnson was nominated for reelection and where Fannie Lou Hamer, accompanied by Dr. Martin Luther King, Jr., made a televised speech on civil rights that helped encourage the passage of the 1965 Voting Rights Act.

One thing you may not know is that it is is the home to the world’s largest musical instrument, a 33,000-pipe organ, and has served as a venue for some of the world’s great musicians. Ray Charles, the Rolling Stones, Beverly Sills, Frank Sinatra, Luciano Pavarotti, Aretha Franklin, Bruce Springsteen, and Andrea Bocelli have all played on the stage of this historic venue. The Beatles made their only Atlantic City appearance at the hall in 1964, and had to be snuck out in a laundry truck afterward to avoid their throngs of fans.

The venue has seen many more unusual events, as well. In 1949, the hall showed the first surgery televised in color, allowing attendees at an AMA convention to watch a procedure being performed in a nearby hospital. In 1971, a Bell Jet Ranger became the first helicopter to fly indoors at Boardwalk Hall.

Since its construction, it has undergone extensive renovations in 1959, 1984, and 2001 to ensure that it keeps its original beauty and usefulness while adding modern conveniences.  In 2013 it is still the largest grossing mid-size arena in the United States and continues to host top named musical artists, sporting events and special events like an annual Rodeo and Cirque Du Soleil to name a few.

2 comments for “History of Historic Convention Hall in Atlantic City”