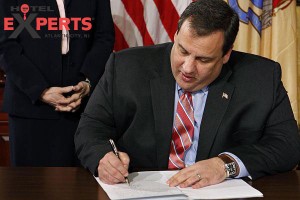 We are Counting on You Gov Christie!

New Jersey has recently become the third state in the United States to pass an online gaming bill, the question is, once approved, can it help the city get on an upward track for revenues going forward? The Bill is known as AS 2578 has already received the green light from the NJ Senate and the New Jersey State Assembly.

Now, the entire matter rests on the discretion of Chris Christie, the Governor of NJ. Within next 35 days, he has the option to sign or veto this bill that has been in the works for a few years. The bill will become a law if the Governor decides to sign it. Hotel and casino owners and local residents may recall that almost two years ago, Chris Christie vetoed a similar bill citing concerns relating to the boundaries of Internet cafes and the state constitution.

What are the Advantages of Online Gaming in Atlantic City?

The passing of this bill will allow the casinos in the city to offer popular online games like poker and blackjack to be played by NJ Residents. The guidelines of the bill have been the topic of widespread debate throughout Atlantic City during this process. According to the state lawmakers, the current legislation addresses all concerns that the Governor may have., as an example, the bill clearly mentions that the location of the servers must be within the property of the casino.

However, other equipment and back-up servers can be located in other locations as precautionary measures only. This process will prohibit casinos from carrying out internet betting outside their legal business premises. The previous Internet gaming bill included a horse racing subsidy worth $30 million, this clause has also been removed from the present bill.

However, the legal experts feel that the passing of the bill may still face resistance due to a certain provision that allows offering licenses to overseas operators as internet gaming affiliates. This means that on behalf of city based casinos, these offshore operators would be able to operate their own systems for gambling.

No matter what future may have in store, the Atlantic City casino hotels can take heart from the fact that Nevada and Delaware are two states that already have legislation’s concerning internet gaming.  Different social groups have already started lobbying in support of the bill in Washington, DC as well as in Trenton, NJ.

Important to the Success of the Beach Resort Destination!

A social media campaign has also been launched by The Poker Players Alliance, a consortium consisting of poker enthusiasts around the world. On behalf of The Poker Players Alliance, their executive director John Pappas recently said, “With such an overwhelmingly supportive vote, it is clear New Jersey’s state Senate has recognized the incredible benefits this legislation will provide for residents and the state’s overall economy. On behalf of thousands of poker players living in New Jersey who have been eagerly waiting for a safe and fair environment in which to play online poker, I urge Governor Christie to sign this important bill into law.”

First let’s see if the bill passes, then, let’s figure out what kind of impact it will have on the cities profits.